In The Queen v. Paletta Estate, 2022 FCA 86, the Federal Court of Appeal held that activity undertaken to generate tax losses does not constitute a source of income or loss for tax purposes. The FCA allowed the Minister’s appeal, upheld the gross-negligence penalties, and sent the matter back to the Minister for reassessment. 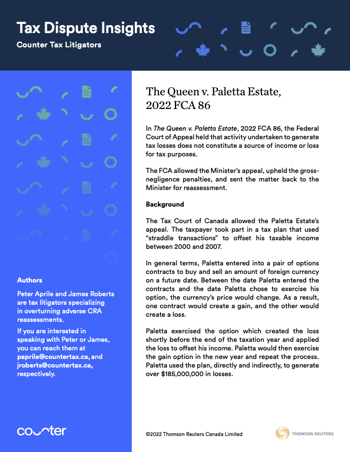 The Tax Court of Canada allowed Mr. Pat Paletta’s estate’s appeal. The taxpayer took part in a tax plan that used “straddle transactions” to offset his taxable income between 2000 and 2007.

In general terms, Paletta would enter into a pair of options contracts to buy and sell an amount of foreign currency on a future date. Between the date Paletta entered the contracts and the date Paletta chose to exercise his option, the currency’s price would change. As a result, one contract would create a gain, and the other would create a loss.

Paletta exercised the option which created the loss shortly before the end of the taxation year and applied the loss to offset his income. Paletta would then exercise the gain option in the new year and repeat the process. Paletta used the plan, directly and indirectly, to generate over $185,000,000 in losses.

The TCC allowed Paletta’s appeal and found he correctly deducted the foreign exchange trading losses in the years under appeal.

The TCC considered several arguments. However, during the hearing, the Minister’s primary argument was that Paletta could not claim the losses because the plan was not a business. The TCC disagreed with the Minister. In particular, the TCC stated that Stewart v. Canada governs and if “one’s activity is clearly commercial, and that no personal element is involved, there is a source of income.”

The TCC found that Paletta engaged in foreign exchange trading to claim non-capital losses to offset his taxable income. However, the TCC found that foreign exchange trading is “by its very nature, a commercial activity” and that there was no personal or hobby element. So, the TCC concluded the trading was a source of income for tax purposes and that Paletta was entitled to deduct the trading losses.

And, in this situation, the TCC held that the Minister did not meet its onus to reopen the statute-barred years and the imposition of 163(2) penalties was not justified.

The Source of Income Test

The FCA disagreed with the TCC’s interpretation of the Stewart decision.

The FCA stated that “no court has ever held that a ‘profit’ or ‘loss’ can arise under section 9 in the absence of an intent to profit”. The FCA stated the Stewart test requires evidence the taxpayer is conducting the activity for profit and that their behaviour is consistent with objective businesslike standards. If not, no business source can exist.

Stewart teaches that, in the absence of a personal or hobby element, where courts are confronted with what appears to be a clearly commercial activity and the evidence is consistent with the view that the activity is conducted for profit, they need to go no further to hold that a business or property source of income exists for purposes of the Act. However, where as in the case here, the evidence reveals that despite the appearance of commerciality, the activity is not in fact conducted with a view to profit, a business or property source cannot be found to exist.

The FCA found it impossible to reconcile TCC’s decision in Paletta and Stewart. And the FCA noted that the situation in Paletta was different than the situation in Walls v. Canada. In Walls, tax avoidance was a motivating factor, but, unlike Paletta, it did not exclusively motivate the taxpayer and activity.

The FCA stated the Stewart test requires evidence the taxpayer is conducting the activity for profit and that their behaviour is consistent with objective businesslike standards. If not, no business source can exist.

The FCA also held that Paletta was either grossly negligent or wilfully blind in not getting a formal legal opinion and portraying his trading losses as business losses. The FCA quoted relevant portions of Wynter v. Canada to describe gross negligence and willful blindness.

Gross negligence … arises where the taxpayer’s conduct is found to fall markedly below what would be expected of a reasonable taxpayer. Simply put, if the wilfully blind taxpayer knew better, the grossly negligent taxpayer ought to have known better.

[T]he law will impute knowledge to a taxpayer who, in circumstances that suggest inquiry should be made, chooses not to do so. The knowledge requirement is satisfied through the choice of the taxpayer not to inquire, not through a positive finding of an intention to cheat.

The FCA emphasized that Paletta’s accountant warned Paletta to get a legal opinion and Paletta’s significant tax exposure. The FCA described Paletta’s chats with lawyers as “off-the-cuff” consultations while visiting law firms on other matters. Also, the FCA highlighted how Paletta framed the activity and plan when speaking with the tax lawyers.

The evidence suggests that in all three cases, Mr. Paletta and his son presented the plan as not being materially different from the one that was in issue in Friedberg … However, as explained earlier, the facts in Friedberg were fundamentally different as Mr. Friedberg was conducting his trading activities for profit whereas Mr. Paletta’s sole purpose was tax avoidance…

[N]o minimally competent tax lawyer could have sanctioned Mr. Paletta’s plan to portray his trades as a business, if informed that he was making these trades not for profit but for the sole purpose of generating tax losses in order to avoid paying taxes.

Paletta was a knowledgeable businessperson. His accountants warned him the tax shelter plan was uncertain. They urged him to get legal advice. He chose not to get formal legal advice. When speaking with tax lawyers, he portrayed his trades as a business even though he knew the plan’s sole purpose was tax avoidance. The FCA commented that Paletta chose not to tackle and cover his significant tax risk.

The FCA believed – on these grounds – that Paletta’s behaviour showed he was indifferent to whether his plan complied with the law.

At best, Paletta ought to have known better than to ask and rely on incomplete and “off-the-cuff” advice, i.e., he was grossly negligent. At worst, Paletta’s behaviour showed that he knew better, i.e., he was willfully blind.

No matter what is true in Paletta’s case, the FCA held the Crown met its burden and upheld the 163(2) penalties.

Paletta was either grossly negligent or wilfully blind in not getting a formal legal opinion and portraying his trading losses as business losses.

It is almost certain the Canada Revenue Agency will continue to find and reassess taxpayers who have engaged in similar tax shelter plans. And we guess the courts will issue similar decisions in these cases. The FCA’s decision and the law are clear now.

If a taxpayer is in this situation, we suggest they get independent tax dispute advice to explore ways to avoid a similar result or reduce the impact.

It is difficult to correct mistakes. Early strategy, case theory, and evidence are so important in these cases.

If a taxpayer is in this situation, we suggest they get independent tax dispute advice to explore ways to avoid a similar result or reduce the impact.
We also think more disputes related to taxpayer activities, motivations, and sources of income will emerge.

Simply put, we expect Paletta will give rise to more – and more intense – tax disputes in Canada.